Wednesday, April 277:00—8:00 PMVirtualYou will receive a link after you register for this program. 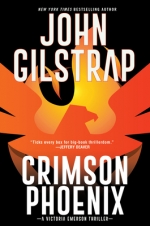 We hope you'll join us for this special program with best selling author John Gilstrap! Known for his Jonathan Grave and Nick of Time series, the second in his newest Victoria Emerson series is coming out the end of February! Crimson Phoenix was the first book in this thriller series. Blue Fire will be the second one. Recognized as one of the most accomplished action writers around, John is the recipient of the International Thriller Writer's Award and an Alex Award! John's inspiration for his Victoria Emerson Thriller series was inspired by the real history of the government bunker at Greenbrier Resort in West Virginia. To learn more about John and his thriller series, please register for this special virtual program.

Registration for this event has now closed.