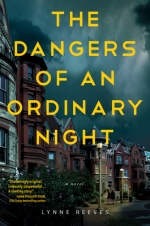 Author Lynne Reeves will discuss her latest book, Dangers Of An Ordinary Night, in conversation with bestselling author Lisa Genova, via Zoom.

About The Author: Lynne Reeves (Griffin) is an internationally recognized family counselor, public speaker, teacher and writer of fiction and non-fiction. Her work has appeared in Parents, Psychology Today, Solstice Literary Magazine, Chautauqua Journal, Craft Literary, Fiction Writers Review, Brain, Child and more. Lynne regularly appears as a media guest expert to discuss contemporary family life and preventive mental health, with her most recent appearances on WBUR's Morning Edition and WCVB's Chronicle. Writing as Lynne Griffin, she is the author of the family-focused novels, Life Without Summer, Sea Escape, and Girl Sent Away. She writes novels of domestic suspense as Lynne Reeves. She’s a member of International Thriller Writers, Mystery Writers of America, Sisters in Crime National & Sisters in Crime New England.

About the Book: The Dangers of an Ordinary Night is an exploration of the explosive family secrets that are often hidden in plain sight. On a chilly fall evening at the prestigious Performing Arts High School of Boston, best friends Tali Carrington and June Danforth go missing after auditioning for a play. They're last seen in grainy, out-of-focus surveillance footage that shows them walking away from the school. Two days later in a town south of Boston, Tali is found disoriented and traumatized by the ocean's edge, while June is pronounced dead at the scene. Tali's mother, Nell, is so bent on protecting her daughter from further emotional harm that she ignores rumors of her husband’s involvement and enlists the help of Cynthia Rawlins, a reunification therapist with personal insight into the riptide that hides below the surface of every unsuspecting family. Meanwhile, Detective Fitz Jameson uncovers a criminal undertow involving the high school’s overachieving students, and finally sees an opportunity for personal redemption from a secret that’s haunted him for years. As Nell, Cynthia, and Fitz confront their own contributions to the scandals that beleaguer them, their lives turn out to be more deeply intertwined than they'd ever imagined. In the end, they must decide what lengths they're willing to go to protect the people they love while also saving themselves.

About The Interviewer: Lisa Genova is the New York Times bestselling author of the novels Still Alice, Left Neglected, Love Anthony, Inside the O'Briens, and Every Note Played. Still Alice was adapted into an Oscar-winning film starring Julianne Moore, Alec Baldwin, and Kristen Stewart. Lisa graduated valedictorian from Bates College with a degree in biopsychology and holds a PhD in neuroscience from Harvard University. She travels worldwide speaking about the neurological diseases she writes about and has appeared on The Dr. Oz Show, Today, PBS NewsHour, CNN, and NPR. Her TED talk, “What You Can Do To Prevent Alzheimer's,” has been viewed more than five million times.

This event is hosted by the Tewksbury Public Library in collaboration with many other Massachusetts Public Libraries.

Register via Link in Description